This great Italian recipe comes to us from a famous New York restauranteer, “Mother Leone.” 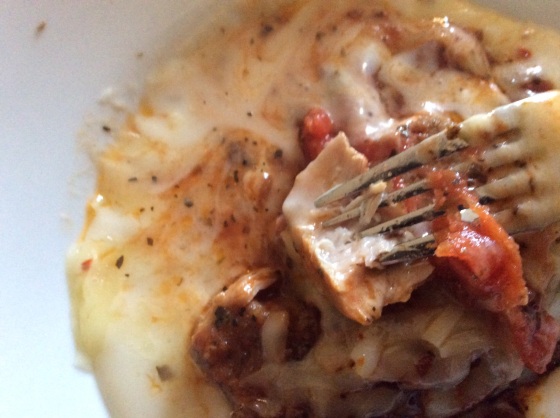 The introduction to Luisa Leone came through a well-worn copy of her son Gene’s  1967 cookbook, perched high on a bookshelf in a dusty antique store in northern Wisconsin.  The teal cover, missing its dust jacket, protected old, authentic recipes, the kind that pass from one generation to the next.

Leone’s was a New York institution, now gone, but still very much missed.

Luisa Leone entered the restaurant business in 1905, her son Gene writes in the introduction. Just a year earlier, she was only dreaming about running a restaurant. That changed the night Leone’s husband Geralomo invited fifty members of the Metropolitan Opera to their home for Luisa’s birthday, including the great opera tenor Enrico Caruso. Caruso, himself, encouraged her to make the restaurant a reality and convinced Geralomo to agree.

Luisa’s resaurant began in her converted living room, then grew to twenty seats, and then to a larger space, then an even larger space in the heart of New York’s theatrical district on West 48th Street, and to eventually to fill two buildings and seat 1,500 guests, serve more than 6,000 dinners on busy evenings. Leone’s had become a multi-million dollar affair that catered to the famous, including W.C.. Fields, George M. Cohan, Presidents Truman and Eisenhower (who wrote a forward for the book). After Luisa died in 1944, her sons continued the business. Later, one son, Gene took over with his wife.  The place became a New York staple, serving Luisa’s cooking far into the early 1990s. Sadly the restaurant closed, but the recipes, of course, live on.

Here’s Leone’s Pork Chops with Spaghetti, except substituted inch-thick sliced pork loin for Luisa’s pork chops and served her sauce and pork over her wonderful polenta instead of pasra. 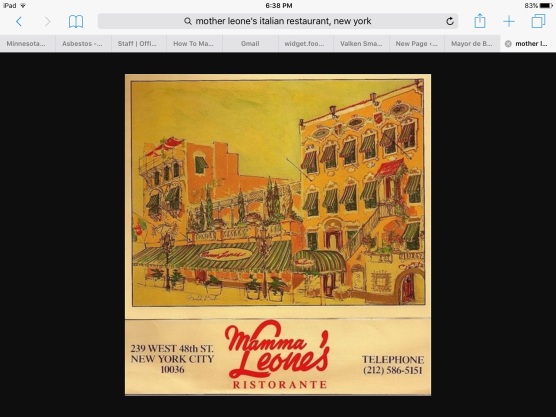 Combine oil and half the butter in a large heavy-bottomed skillet and heat garlic black and red pepper 2 min. Sprinkle pork with rosemary and brown in the pan, 5 min. per side. Lower heat to medium, add tomatoes, salt and parsley. Cover and simmer 20 min. Uncover and simmer 20 min. more, until pork is done and tender. Taste for salt.

While cooking prepare spaghetti as in the original recipe, or try the polenta below.

Soak the cornmeal in the cold water. Stir it into the boiling water, add salt and butter. Stir constantly and simmer 20 min. to a creamy consistancy. Taste, add salt if needed. Once polenta is cooked, spread it on a warm plate, sprinkle with a little cheese and arrange the cooked pork and sauce on the polenta, sprinkle with cheese and serve.